Doctors gave new least of life to 23-year-old youth and 55-year-old man.
Chronic kidney disease is an important cause of morbidity and mortality in India. For the last few years, there has been a rapid increase in the number of patients of this disease.
One such 23-year-old youth was brought in critical condition to Yatharth Hospital, Jhansi-Orchha. He had symptoms of high blood pressure, palpitations, difficulty in breathing, and generalized weakness. The critical care team of Yatharth Hospital immediately attended the patient, and took him on ventilator. The necessary life saving treatment was done. On being diagnosed with kidney disease, he was admitted to ICU under the supervision of Nephrologist Dr. Manish Mahajan. Patient showed symptoms of the fifth stage of chronic kidney disease. KUB CT scan showed stones and hydronephrosis in the right kidney; the left kidney was found to be small. Patient also had bilateral pleural effusion. Hemodialysis was done. Patient was shifted to the ward afterwards and was discharged after his condition improved.
Dr. Manish Mahajan, Consultant, Nephrology, said, "In chronic kidney disease, both the kidneys stop working gradually, due to which toxins and other substances are not able to be filtered from the body. These accumulated toxins affect the other organs of the body, which creates a more fatal condition for the patient. Dialysis or kidney transplant are the treatment options in such cases.”
Chronic kidney disease patients seek medical attention when they are symptomatic, which is usually very late in the course of disease.  The disease mostly comes to light when kidney function evaluation is done for other health conditions.
Another 55-year-old male was brought to Yatharth Hospital, Jhansi with shortness of breath. The patient was having cough with excessive sputum, generalized weakness, loss of appetite and loss of weight for last 4-5 months. After initial treatment, the patient was immediately shifted to ICU under the supervision of Internal Medicine Consultant Dr. Athar Parvez Ansari. Due to shortness of breath, the patient was put on BiPAP support. BiPAP (Bi-level Positive Pressure Machine) is used for patients who do not need a ventilator but have shortness of breath. Symptoms of COPD (Chronic Obstructive Pulmonary Disease) were found in X-ray and other tests. In COPD, the airways of a person's lungs get narrowed, causing difficulty in breathing.
After the patient's condition improved, he was shifted to the ward. The patient was discharged from the hospital after his condition was stable.
Dr. Athar Parvez Ansari, Consultant, Internal Medicine, said, “This patient presented with severe type 2 respiratory failure, with pCO2 112. Type 2 respiratory failure is a serious disease, where the level of oxygen in the blood decreases and the level of carbon dioxide increases, which can be life-threatening if not treated on time. By the time of discharge, the pCO2 had improved to level 50-60.” 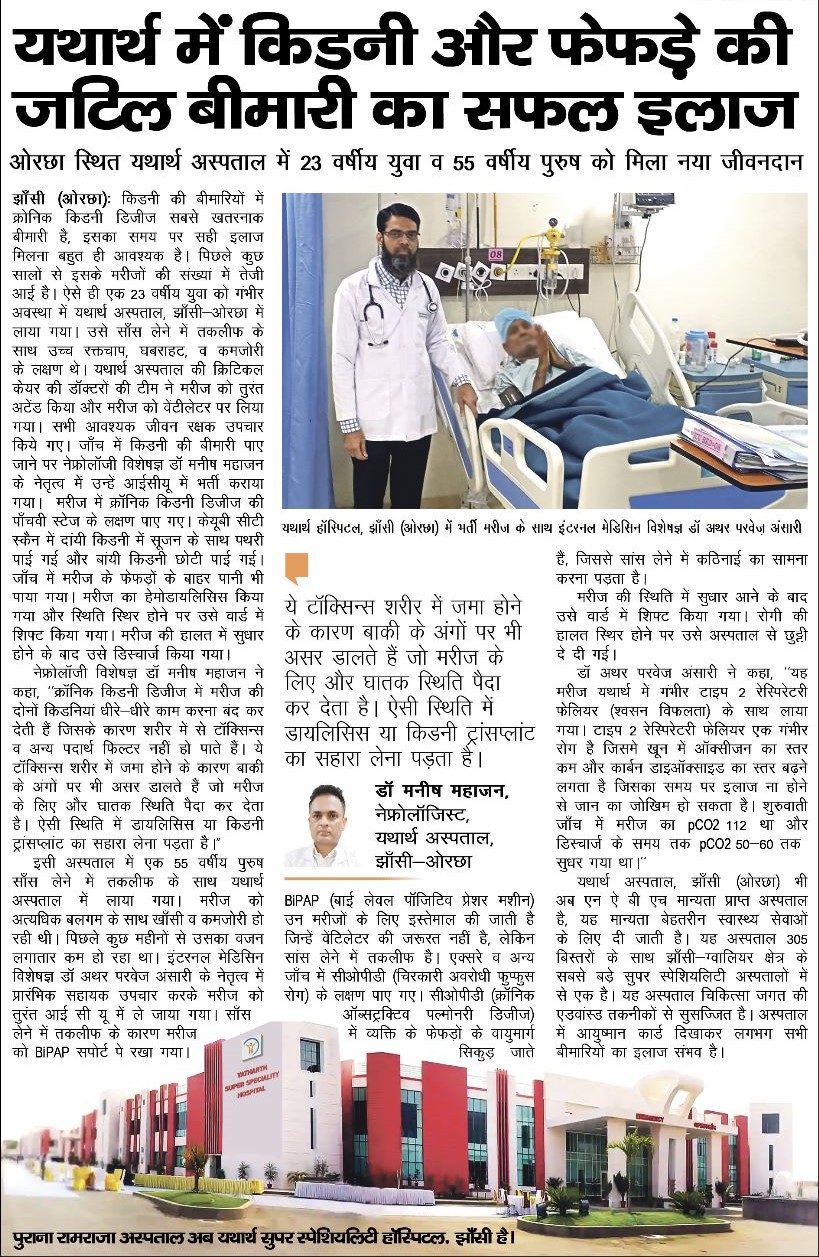